I’m writing this post with my feet, since my arms and shoulders are so $%#@*&!! sore from yesterday’s Skaha Lake Ultra Swim. An 11.8 km marathon swim of ecstasy and agony, but not for the first time. This was my second time swimming Skaha. Why go back for more, you might ask? Well, that’s an interesting question for an open water swimmer, since we as a breed seem to seek out events that test us, tire us, thrash us about, and leave us battered, weary, and definitely wanting more. 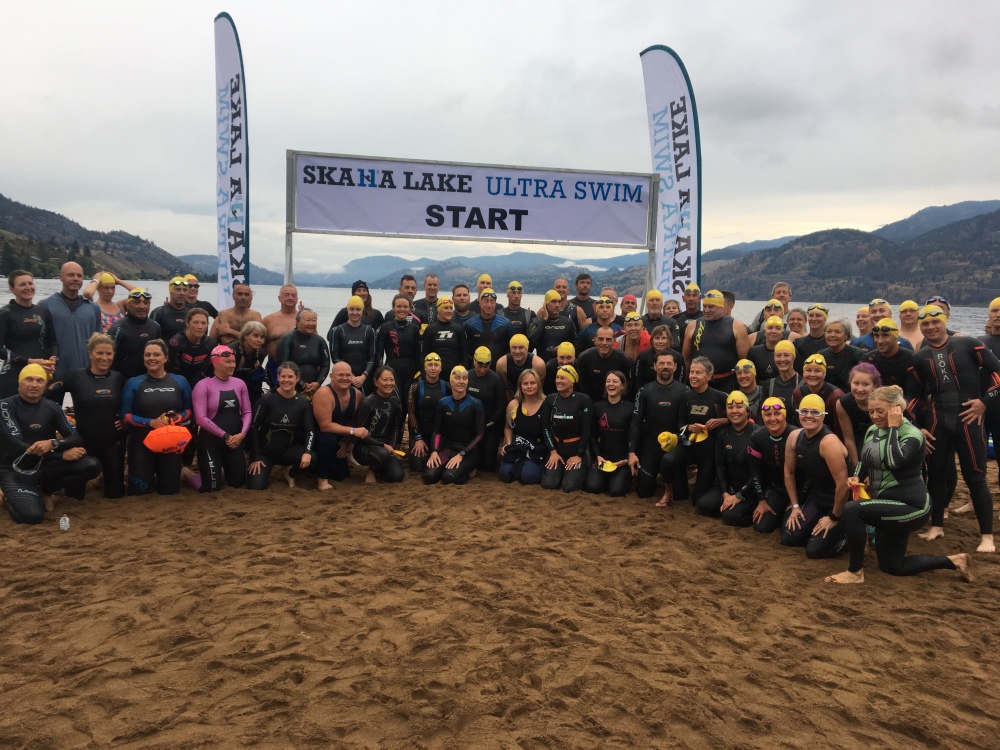 When I talk to people about this “hobby” (and certainly this particular swim), a quizzical look often takes over their face. This is soon followed by an obvious expression of concern. And that’s ok. I get it – spending 4 hours in a wetsuit churning across a lake isn’t everyone’s cup of tea. But it’s definitely mine, and the 93 others who challenge themselves to make it from Penticton to Okanagan Falls early on a Sunday morning in forest fire season, with only a lone support kayaker to keep them company, and only some carbohydrate gels (and maybe some pickle juice) to eat.

Last year was my first Skaha Ultra (or any ultra), and I spent the majority of the winter leading up to the event feeling freaked out and excited and wondering if I was preparing properly for such an extension of my normal distance. I swam very near to the distance a couple of weeks before, so I entered the water very confident that I would conquer the distance but with no idea how I would fare compared to the other swimmers. I was very pleased with the results and it led me to seek out some longer swims, some of which have happened or are in planning or application stages. But – it whet (swimming pun) my appetite for pushing harder and for longer distances to see what would be possible for me. 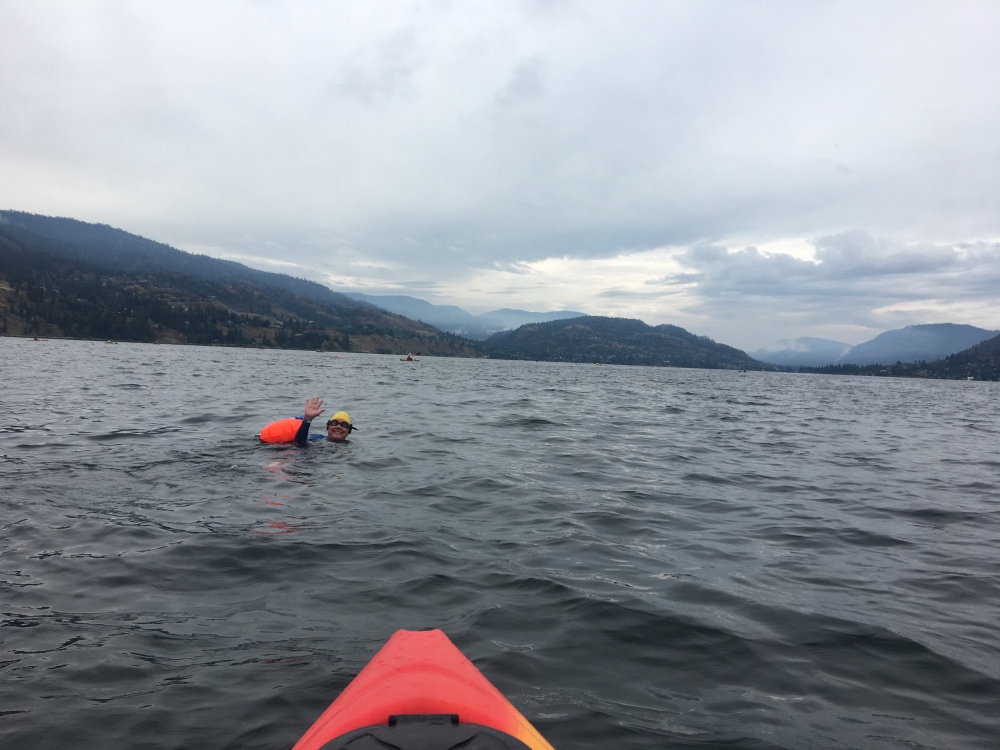 This summer has been quite different! I trained all winter and had a respectable showing in the Across the Lake Swim. Soon after that I jetted off to Europe for an epic bike tour that certainly worked my legs and gave me calves of steel, but offered somewhat limited swimming opportunities for the type of distance I maybe should have been working on. In an attempt to keep my nerves at bay and my harsh inner critic in her locked box,  I thought of it as a long taper…

…until I was 8 km into the swim, and my right arm and shoulder started to scream at me.

“YOU DIDN’T TRAIN FOR THIS, YOU IMBECILE!” said my right shoulder, and the left one whimpered in sympathy.

“YOU ARE DOING PERMANENT DAMAGE TO ME, YOU ASS! MAY THE FLEAS OF 1000 CAMELS INFEST YOUR ARMPITS.” said my right arm, and the left one nodded but couldn’t speak because it was totally numb and had been since the 3 km mark.

“WE’RE PRETTY FUCKING HAPPY. THANKS FOR ALL THE BIKING.” said my legs, happily kicking a nice 5 beat without complaint.

I dug deep within and promised my arms and shoulders that I would reward them handsomely if they’d just keep swimming. I wouldn’t ask for turbo power, just survival. I would never again let them sit around, merely steering and lifting bites of apple strudel to my mouth, for a few weeks before a long event like this.  I would let them soak in a hot tub for at least 30 minutes after the event. I bargained with my upper limbs. And they held. But just barely. They even let me forget about them for the last kilometre, allowing me to finish strong, pushing myself upright to  run through the finish (clapping – apparently, and according to this photo!!), and accept my well-earned Finisher’s Medal, which was even nicer than last year!

Arms and shoulders aside, the rest of the swim was amazing. Scarlet, my support kayaker, charted a nice straight line to Ponderosa Point, and offered lots of helpful encouragement along the way. She even called me a “tough little fucker”, which I really liked. Thanks to the awesome Stevens for lending us the kayak.  The conditions were great and much less smoky than last year. I finished a respectable 39th overall, and even though I added 9 minutes to my time, I’m happy with the result. Blame the wind, blame the extra currents, or blame my undertrained arms and shoulders….but what’s the point?  An event of this length is a huge challenge for any body, and even finishing deserves a big bottle of Prosecco or $100 worth of room service or whatever else floats your boat. 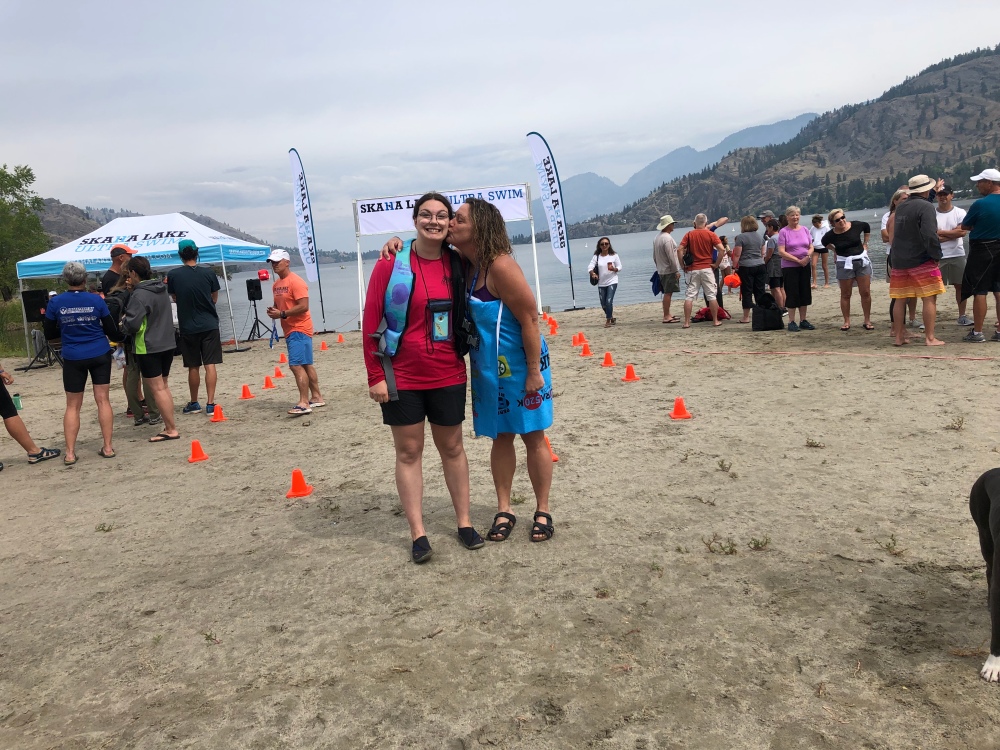 I’d like to express my thanks again to the organizers of the Skaha Lake Ultra Swim. This event runs so smoothly and gives great confidence to the participants, who really have a lot of other things on their minds as they prepare. From the safety meetings to the convenient post-swim shuttle back to Penticton, this team has it dialed. If you’re interested in challenging yourself, the registration sells out quite quickly once it’s posted. You have to decide fast. And I think you should do it.

Will I be back next year for a three-peat? It’s certainly possible! For now, I’m sitting in the airport waiting for my flight to Stockholm, where I will swim 3.2 km at next weekend’s Riddarfjardsimningan (say that aloud after a few airport margaritas).  My arms and shoulders haven’t spoken to me since yesterday. They’ll get over it.